Scottish Apprenticeships are playing an essential part in the nation's economic revival - they allow individuals to work, learn and earn to gain the skills employers need. In recognition of Scottish Apprenticeship Week, we spoke to Louiss Dobie (Engineering Planner) about his experience as an apprentice and his journey in R&W Scott.

"When I left school I was sure I wanted to be a chef, but it wasn’t for me in the end. By 25 I’d started to give up hope of getting a stable job and a career. In 2015 I was working part time as a Catering Assistant, I took a chance and applied for a temporary job with R&W Scott working on the production lines, I just had a good feeling about it even though it was a risk to take a temporary job when you have a family! I enjoyed the job, but it wasn’t until I started working here and seeing the Engineers at work that I realised that’s what I wanted to do! 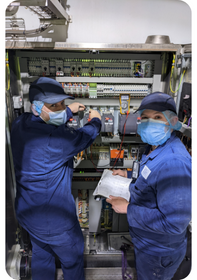 I took the opportunity to put myself forward for an Engineering Apprenticeship shortly later in the same year and I was successful. I was excited but also apprehensive about going back into education and thought the course would be full of people who’d recently left school and were used to studying/exams etc. It pushed me out of my comfort zone and it was the best thing I did. I’ve gained skills whilst working, got a career I’m proud of and I’m much more confident in myself now.

I’ve now completed a 4 year Engineering Apprenticeship, then worked as an Engineer before being promoted to Engineering Planner. I’m currently continuing my studies whilst working, doing a course with the Institute of Leadership and Management and never stop learning on the job. I’m also fortunate enough to be supporting our current apprentice Liam Steele, passing on some of what I learned but equally learning from him and his different perspective. Having an apprentice on the team is really useful for keeping us all up to date and on the ball!

If anyone is thinking of going down the apprenticeship route, I’d say just go for it! If you don’t know what you want to do, keep trying different things until you find something that works for you. There’s lots of options out there and some of them you won’t come across until your working. It’s the best thing I did!”